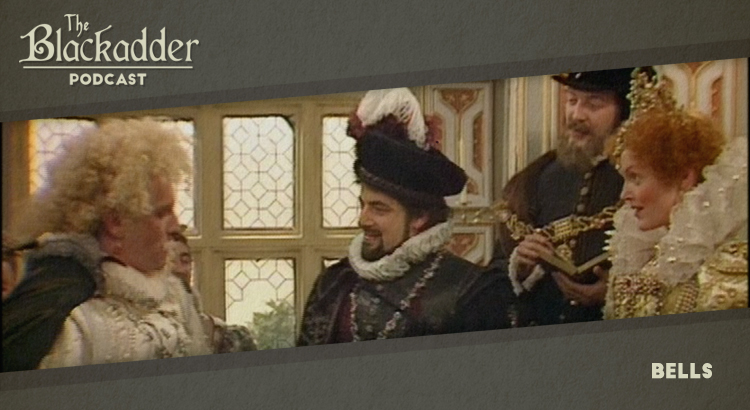 Bells was the first episode of Blackadder II as the show returned after the two-and-a-half year hiatus that followed The Black Adder. This series is set in Elizabethan London and re-introduced audiences to Rowan Atkinson and Tony Robinson in their now-familiar roles as Blackadder and Baldrick.  In this podcast Gerry and Iain take a look at the plot, characters, actors and others involved in the creation of Bells as well as some more general thoughts on the series.

Supporting the main cast were John Grillo as the homophobic Dr Leech, Edward Jewesbury as Kate’s father (who wishes she would take a different career path), Sadie Shimmin as a Young Crone in Putney and Barbara Miller as a Wise Woman who offers Blackadder three options to resolve his predicament.

Bells was released in 1986. It is 30 minutes long and originally aired on the BBC. Blackadder II can be viewed on Netflix in the UK and Ireland and a remastered set of the whole series is available on DVD around the world (Region 1) (Region 2).